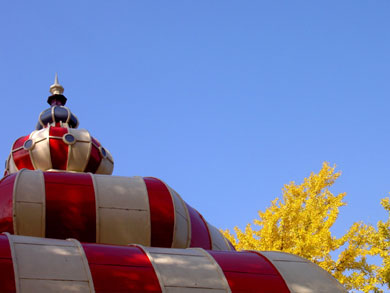 Welcome to the “Preview” edition of 52nd City Magazine, a publication that we hope to see on old-fashioned paper in April, 2006. We’re excited, though, to feature the works of some talented local writers, in a variety of forms, as well as some fine photography. We look forward to our next, “Debut” issue in the spring, and encourage you to look at our Submissions page, in case you’re interested in adding your own voice to this emerging publication.

In the meantime, we focus on “Spaces” in St. Louis. That single word brought in a unique blend of works, discussing everything from a teenager’s double-life inside a South City coffeehouse to a film series director’s love affair with his affair to a trio of evocative poems. Enjoy.

Also, be on the lookout for some other, small press publications coming from 52nd City in coming months, as well as continued blogging by the three editors at: www.blog.52ndcity.com, which focuses exclusively on cultural events taking place around St. Louis. On occasion, we’ll toss a live event, so check back frequently to see what’s new in our little of town.

The Bars of Our Fathers | by Thom Fletcher

Deep in the heart of Chesterfield: A city rat considers the suburbs | by Chris King

Stardust in a Phrygian Key | by Stefene Russell

The Ghosts of Winifred Moore | by Mike Steinberg

Four Days Behind the Iron Curtain, or, I'm With the Band | by Mary Kaye Tonnies